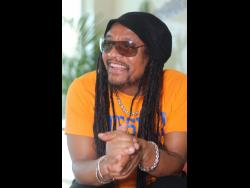 Reggae singer Maxi Priest was in-studio editing on Tuesday when his phone started blowing up with congratulatory messages. At first, he wondered what on earth was going on. A subsequent call from his manager, Toby Ludwig, confirmed the good news. His album, It All Comes Back to Love, was nominated in the reggae category of the Grammy awards.

“My phone was going off so much that I had to stop working and respond to the messages. I have nine breda and sista, and nuff niece and nephew, so yuh can imagine that family alone kept me busy, plus music family. Then my manager called and asked if I had received the news. However, when he told me that it was It All Comes Back to Love that had been nominated, I was taken aback, because I thought it was the new album United State of Mind,” Maxi Priest told The Gleaner.

But, naturally, he is ecstatic and first of all took time to congratulate the other nominees in the reggae category – Buju Banton, Toots and the Maytals, The Wailers and Skip Marley. “I am truly humbled and thankful and happy to be nominated alongside these great reggae artistes,” the London-bred reggae vocalist said.

‘Achievement for all of us’

“Wow! New broom sweeps clean but old broom knows the corners,” Maxi said of the collaborative project with Shaggy, with whom he has written songs before recording with him for three months at his Long Island studio, The Ranch.

“This nomination is an achievement for all of us, not just me, and I am humbled and blessed to accept it on behalf of all everybody. A big massive thank you to Mr Boombastic, Shaggy, and the crew at The Ranch. Big up to all the artistes who participated in making this album special, Shaggy, Estelle, Anthony Hamilton, Bounty Killer, Inner Circle, Noah Powa and my son, Che Sav. This is not my first Grammy nomination, but it feels very special,” he declared.

Shaggy was quick to post a message on social media. “Congratulations to @therealmaxipriest on his nomination to the 2021 Grammy awards, for best reggae album. I’m happy to have been a part of this project and congratulate all who participated,” he posted on Instagram.

“In this business, support is key, and it’s a great feeling when friends work together on something that makes you realise that it really all comes back to love. I am blessed to be able to continue this journey that I started so many years ago, and thanks to all those who supported me. I sing the songs, but I am not the one who markets them or buys them or plays them. We’ve made an impact, and I’m truly thankful. Give thanks because It All Comes Back to Love with a United State of Mind,” the singer said.

It All Comes Back to Love is the third Grammy nomination for Maxi Priest. His previous nominations were Fe Real (1994) and Man with the Fun (1997).

According to his bio, Maxi Priest is the first British-born singer to graduate from the London reggae sound-system Saxon Studio International, introducing the sound of lovers’ rock to a global audience. Before joining Saxon, Maxi embraced Rastafari and served an apprenticeship with South London sound-system Negus Negast and the legendary Jah Shaka. Throughout his entire career, Maxi has adhered to the principles of his faith by making conscious music of all kinds.

The 63rd annual Grammy Awards is set to air on CBS Television Network at 8 p.m. on Sunday, January 31, 2021. The Daily Show’s Trevor Noah will host the ceremony.